My daughter and I set out from the apartment at 5:00 to make it to the 5:40pm Character Palooza on the Streets of America today.  If you need to know the details of what Character Palooza is and how it functions just click this link.  The info is ALWAYS on the left hand bar and is found weekly in my www.characterlocator.com app.

We arrived at 5:38 pm on the San Francisco Street part of the Streets of America and found a few people waiting around for Character Palooza to begin or just resting.  Those with advance knowledge would have been prepared for the 5:40pm arrival and shown up a few minutes early. 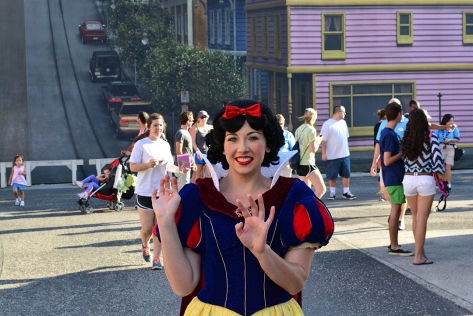 Debbie was interested in visiting with Mulan.  Mulan took her by the hand and walked her to the meet and greet location of Mulan’s choosing.

So, in the brief moment that my phone was working properly, I snapped this photo and posted it to my Twitter account.  I didn’t even notice the backdrop.  Many people found the setting pretty funny.

My daughter enjoyed chatting with Mulan before deciding who she’d like to visit next.  She usually isn’t just a photo and leave girl, she likes to chat and often comes up with special Interaction Tips that I add from time to time to the list and the app.

She said that Geppetto and Pinocchio are fun and they are hard to find these days, so she chose to meet them next.  Pinocchio gave her the biggest hug.  Debbie loves character hugs.  I asked them to pose as puppets and Gepetto chose the puppet master role.

In my previous post about when and where to find Character Palooza, I mentioned that the characters were walking in right beside Lights, Motors, Action.  That changed slightly a while back and I haven’t documented it.  They appear on the very end of the street to the right of the giant backdrop.

Jessie is a favorite, so we met her with a huge 3 minute wait!  I know, why the pain, right?  I mean we could go to Magic Kingdom and wait 20-30 minutes instead!  Remember, there’s no guarantee what characters will appear and they don’t appear for inclement weather or lightning in the area.

We saw Aladdin and Jasmine, but Debbie skipped them because she saw them last time here.

The Green Army men were patrolling the area and keeping the lines in order.  I’m sooooo glad that Disney took my advice and allowed lines to form.  (Humor for those who miss that sort of thing) All the running around and screaming that there was no line with pushing and shoving wasn’t much fun.  If you have soldiers at your disposal, use them.  Everyone respects men with grenades on their belt.

Meeko can be a bit difficult to find these days.  I do have a list of rare characters and uncommon characters that might help you find him, but he’s not guaranteed at any park these days.  He is pretty likely at Character Palooza though.  As it relates to the rare/uncommon characters, I have no way to give you an accurate probability of appearances.  I can just point you in the right directions like Epcot Training and you can hope to see someone.

Did I tell you that she loves her character hugs?

After meeting Stitch, she chose to visit with Snow White.  Snow asked who her favorite Dwarf would be.  Debbie said it’s “Happy.”  Pretty good choice for my daughter who is happy about 98.2% of the time.  Snow said to feed her some gooseberry pie the other 1.8% of the time.  We talked about how exciting it is going to be to ride inside the Seven Dwarfs Mine Train.  The Mine Train should begin soft openings by early April with an official opening on May 1.

Goofy was chilaxifying on the stairs while waiting to give out another hug. 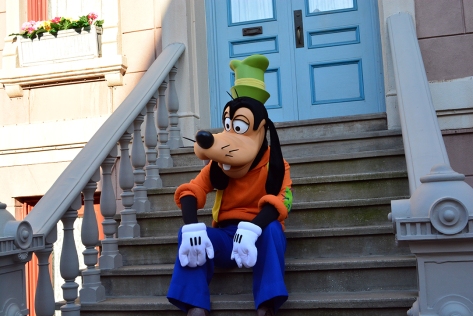 She thought about meeting Aladdin and Jasmine at this time, but the line was too long because the characters are only out 20 minutes and we had 5 minutes left.  We opted to meet Chip n Dale in separate locations.  It’s the only place you meet them separately.

Minnie was out distributing some love, but we had planned to meet here inside the Animation area and only waited 4 minutes to see “Sparkly Minnie” 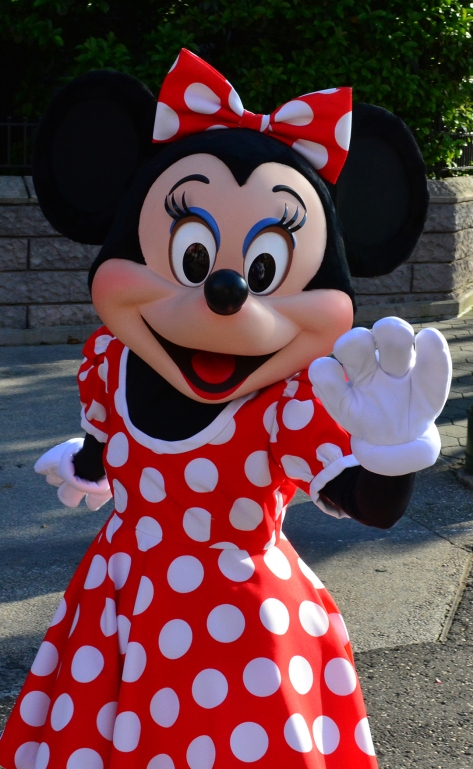 Not the best photo, but it tells the story

I went over to the exit to snap some pics of the characters as they departed.

Character Palooza is a great way to meet a bunch of characters.  Some may be rare and some times villains appear, but don’t count on it as there is no way to know who will appear from behind the magical entry point. 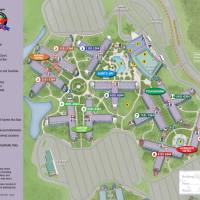