On day one I had no clue what the actual schedules were for the characters.  They had changed drastically since 2012.  I made my way around and around and around Hollywood Studios gathering data on appearance times for characters.  I saw a very short line for Commander Cody and decided to drop in to meet him.

I returned the next day with my friend Josh in hopes of meeting Ahsoka Tano, but she was a no-show for her scheduled meet and Cody appeared again.  This time I wanted to do something different with the meet and decided to ask Cody if he would pose INSIDE the blister pack.  I have to say it was the easiest blister pack to open in history.  I usually say, “Our enemies don’t need weapons, they just send us blister packs.”  Cody was accomodating, so here’s those photos.

About an hour of so later I returned to meet Asajj Ventress.  I actually don’t really enjoy meeting her.  She makes me feel uncomfortable.  I’m sure she’s a nice person and all, but she is more scary than Darth Maul to me.

My schedule worked out well on Sunday to attempt to meet Commander Cody, Ahsoka Tano and Captain Rex all together.  I stood in the shade next to a bench and met some new friends of the blog.  We decided to join the line about 10 minutes before Ahsoka was to appear.  The kind Cast Member was telling everyone that Cody would be leaving in 10 minutes, but the schedules didn’t show that.  I told the people around me that it should be Cody, Ahsoka and Rex in 2 minutes.  Bingo!  Ahsoka and Rex showed up almost right on time.  I like taking photos of groups of characters like this when possible.

I asked Ahsoka if I could snap a couple of photos of her alone, because the ones I took last year were awful compared to my new camera.  She was very sweet and accommodated my request.  It appeared to me that Captain Rex had a new cleaner costume this year, but I didn’t want to hold up the line with my photo shoot.  I noticed in my old photos of Ahsoka that her costume had changed drastically between 2009 and 2012.  You can see that by clicking on her name at left or searching her name above.  Ahsoka has a great smile.

Except for the one glitch with Ahsoka not showing for the one meet, the schedules were spot on throughout the weekend. 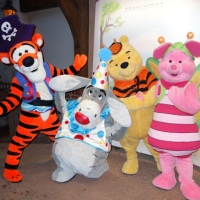